Reading the blogs of lcamtuf and Chris Evans is really what got me interested in browser security, so I’m always on the lookout for novel cross-domain data theft vectors. Today I’m going to go into the discovery and exploitation of such a bug: A timing attack on Firefox’s document.elementFromPoint and document.caretPositionFromPoint implementations.

I was looking at ways to automatically exploit another bug that required user interaction when I noticed elementFromPoint and caretPositionFromPoint on the MDN. Curious as to how they behaved with frames, I did a little testing.

I made an example page to test:

elementFromPoint(x,y) behaved exactly as I expected, when used in the web console it returned the iframe on my page:

caretPositionFromPoint(x,y), however, was returning elements from the page on cbc.ca! 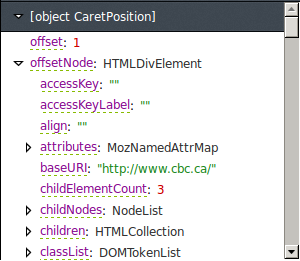 However, I found I could access offsetNode when it was set to null. offsetNode seems to be set to null when the topmost element at a given point is a button, and that includes scrollbar thumbs. That’s great for us, because knowing the size and location of the frame’s scrollbar thumb tells us how large the framed document is, and also allows us to leak which elements exist on the page.

For example here’s what we can infer about https://tomcat.apache.org/tomcat-5.5-doc/ssl-howto.html#Create_a_local_Certificate_Signing_Request_(CSR) through its scrollbars: 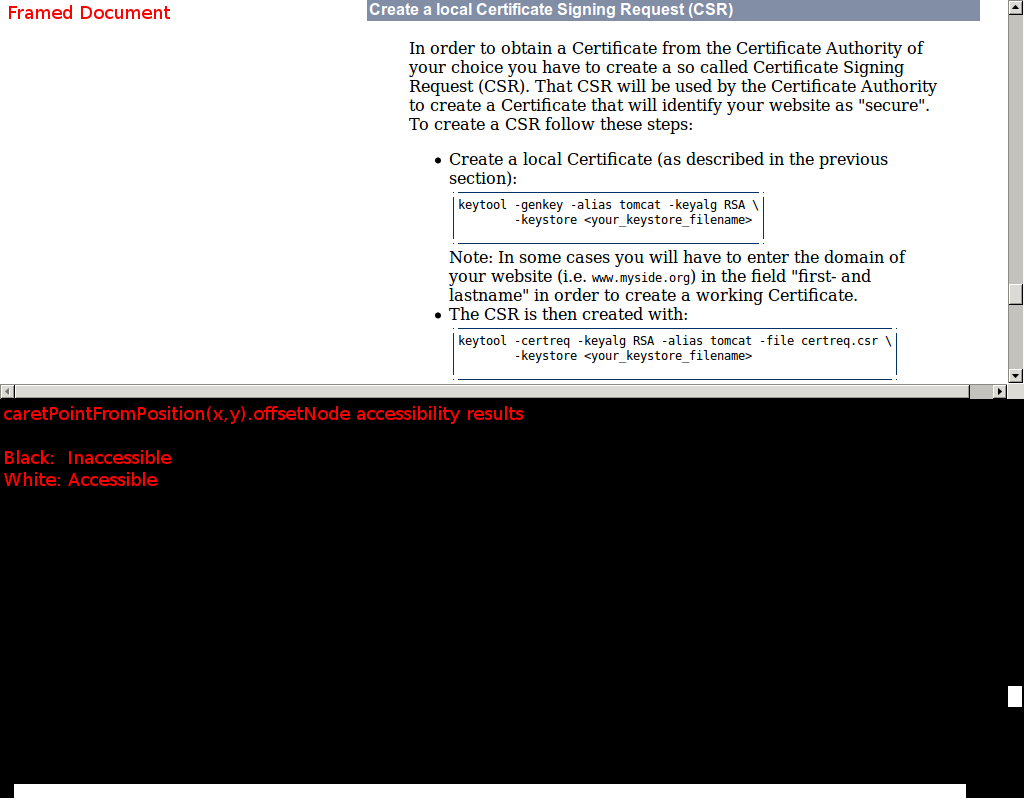 The vertical scrollbar thumb has obviously moved, so we know that an element with an id of Create_a_local_Certificate_Signing_Request_(CSR) exists in the framed document.

The following function is used to test offsetNode accessibility at a given point in the document:

Knowing the page’s size and whether certain elements are present is nice, but I wanted more. I remembered Paul Stone’s excellent paper about timing attacks on browser renderers and figured a timing attack might help us here.

To test my theory I made a script that runs caretPositionFromPoint(x,y) on a given point 50 times, then stores the median time that the call took to complete. Using the median is important so we can eliminate timing differences due to unrelated factors, like CPU load at the time of the call.

Once we’ve gathered timing measurements for all of the points across the iframe, we can make a visualization of the differences: 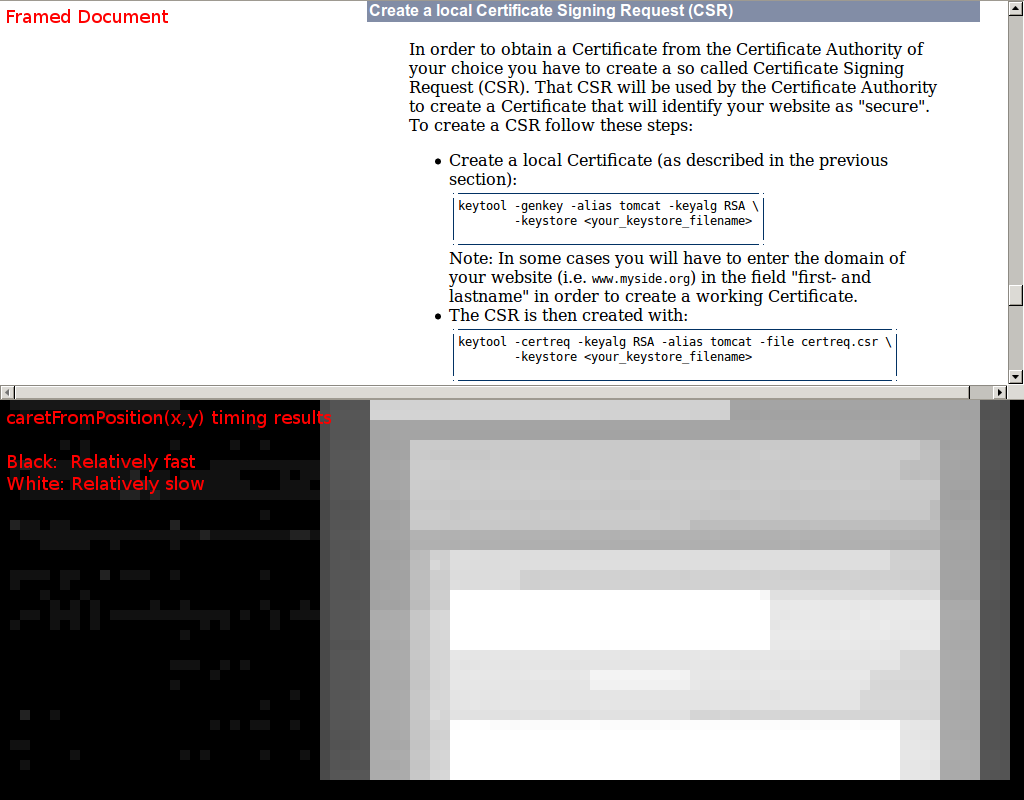 You can see a number of things in the timing data: the bounding boxes of individual elements, how the lines of text wrap, the position of the bullets in the list, etc.

It also seems that even though elementFromPoint doesn’t return elements from the framed document, it still descends into it for its hit testing, so it’s vulnerable to the same timing attack as caretPositionFromPoint.

So we can infer quite a bit about the framed document from the timing information, but can we actually steal text from it? Maybe, with a lot of work, depending on the page’s styling.

I’d hoped that caretPositionFromPoint’s real purpose (determining what character index the caret should be at for a given point) would yield large enough timing differences to leak the width of individual characters, but that didn’t seem to be the case.

Since we can tell how wide a line of text is, we can extract text using a similar method to sirdarckcat’s. First we measure how long the line is, then we make the iframe more narrow to force the text to wrap, then we subtract the new width of the the line from the old width, giving us the width of the word that just wrapped.

Since most sites use variable-width fonts (“O” and “i” are different widths on this blog, for example,) many small words have distinct widths that make them easy to pick out. With longer words, there may be a number of valid words with that width, however an attacker may be able to determine what word fits best using the context of the surrounding words.

Note that since we need to force text wrapping to get these measurements, it’s harder to steal text from fixed-width pages, or pages that display a horizontal scrollbar instead of wrapping text (like view-source: URIs.) Pages that use fixed-width fonts are also more difficult to analyze because characters do not have distinct widths, we can only determine the number of characters in a word.

Note that the last Firefox version these actually work in is 26, if you want to try them out you’ll have to find a download for it.