Here’s one that’s been covered a bit before: NoScript makes it easy for whitelisted sites to see what other sites are on the whitelist.

So what’s the issue?

Most of the pertinent info is in the previous paper, but I’ll give a brief summary. By default NoScript operates in whitelist mode, forbidding scripts from all domains. Once a site has been added to the whitelist, scripts from that domain as well as those included from other whitelisted domains may be executed on the page.

NoScript’s default whitelist is fairly small, and users don’t generally share sets of whitelist rules (like with Adblock Plus,) so if a site is whitelisted the user must have used or visited that site.

The method described in the paper involves finding a valid script file on the domain you want to test and observing its side effects (modifications to the window object or the DOM.) This can be tedious for an attacker, and requires a bit of manual work. It may also pollute the DOM / window object with junk and break our testing code!

The same method may be used to determine if NoScript has blocked a resource that would normally return a 200 HTTP status code. http://domain.tld/ usually returns HTML with a 200 status code, so that’s a pretty good candidate for testing.

If you have google.com whitelisted, this will say “google loaded!”. Otherwise (or if google.com is down for some reason) this will print “google failed”.

Cool, let’s see it in action!

Here’s an example of how the attack may be used, including a timing attack based on the RequestPolicy bypass described in my last post. Mind, the timing attack is a bit spotty, and generally doesn’t work on the first page load. Refresh the page if it doesn’t work the first time.

If you don’t have either RequestPolicy or NoScript installed, here’s what you should see: 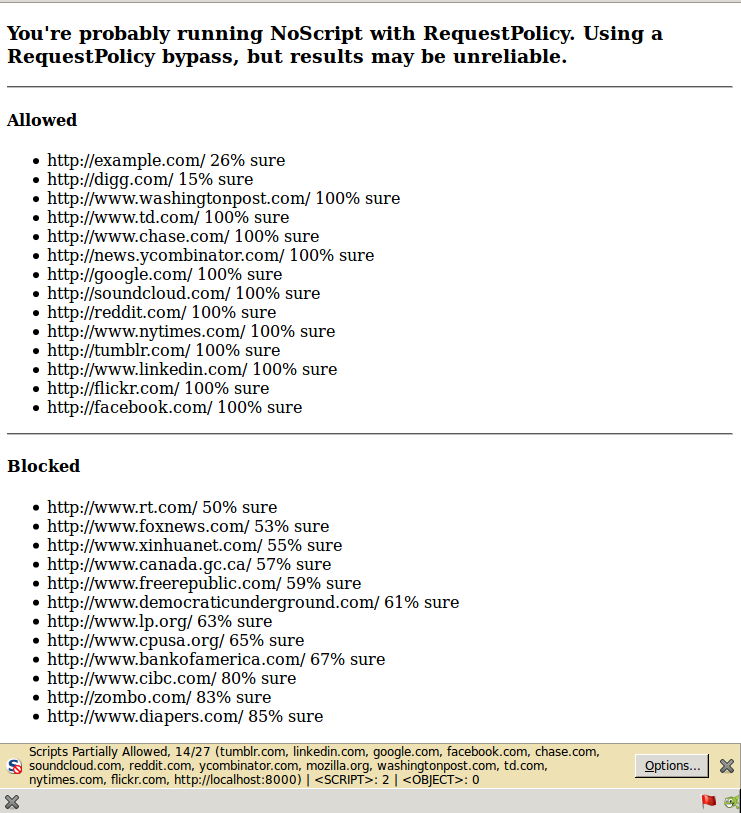 How can it be fixed?

Global whitelist entries by their very nature leak info to any other site on the whitelist. This won’t be fixed in NoScript until support for per-site whitelists is added and people are encouraged to remove their old global rules.

In the meantime, using a patched RequestPolicy will give you a per-site whitelist for all cross-domain requests, effectively mitigating the issue.